This last week saw the consumer launch of the Oculus Quest ($399 US). I received mine and after playing RoboRecall and TiltBrush, I successfully side-loaded (I’m already a registered developer, it is free to become one and so activating Developer mode was already available to me) one of my picture galleries; my 25th Wedding Anniversary. 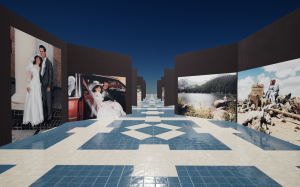 I was pleasantly surprised that all of the work I have done teaching myself Unreal Engine and figuring out how to deploy to first GearVR then Oculus Go, it was all coming together. However, both GearVR and Oculus Go are 3DOF (degree of freedom) headsets. Meaning that using a Bluetooth game pad controller, one can only move around using ONLY the game pad controller, you can swivel your head to change your view but movement has to come from the controller itself. More about something radically different in a moment.

The ‘Quest is a true 6DOF wireless headset. It is configured using a phone app. So not only does one get to move your head, you can also move with your feet and the scene will react accordingly.

Now I already have the original CV1 Rift and so for the moment I’m not interested in buying the new Rift S. It is a wired 6DOF desktop rig and movement with your feet is extremely limited and it uses a Guardian system to define your play area. If you go outside the area, the screen will go dim- this is by design for safety.

While I was eagerly awaiting my ‘Quest delivery, via Twitter I stumbled across an interesting video. It shows someone who temporarily DISABLED the Guardian system on the ‘Quest and was able to walk around using his feet in a video game! Here is the video– it is in French but there are English subtitles.

So on my first outing under a cloudy sky to try this at a local grassy park, I didn’t know how to disable the Guardian system at first so I just tried to define an extremely large play area. It didn’t work. So I had to do some searches and eventually figured out how to disable it.

Once I did, I tried again. It was a near religious experience for me! I put away the controllers and I found myself walking around inside of my art gallery, using JUST my feet, hearing the birds and feeling a gentle breeze blowing. Magical!

I have some family members who are extremely sensitive to motion sickness. Having them look at my previous creations was unsettling at times.

HOWEVER! We tried again using the ‘Quest outside of my home on the sidewalk and guess what? NO MOTION SICKNESS! Because the scene is moving exactly with your feet.

My church has an indoor gym the size of a basketball court. I tried it out there and it works! Although I have realized that I built it for VR and not a hybrid IRL (in real life)/VR so I need to work on the dimensions a bit. I was able to walk down an entire row using the entire length of the court but only three rows across as my gallery is pretty wide. So three out of five rows isn’t bad 🙂

The Oculus manual clearly states that you can damage the sensors/camera and the ‘Quest is intended for inside use only- outside use is Prohibited. With that said, if one tries this outside, it would need to be a under a solid overcast sky or before sunrise or after sunset else one could damage the headset and/or void the warranty.

Also when you turn off the Guardian system, it is to be temporary and you must turn it back on. In fact, I found out that even with it the ‘Quest powered on and switching between users, the Guardian system can come back on automatically. So heads-up.

For those of you who don’t know what a mind palace is, here is a link.

In the past, I have built some small mind palaces using Unreal Engine for my own purposes. These have always been fixed seated experiences.

Now, if one is careful, one can create mind palaces that one can walk around in. This is a huge development. The key trick in using mind palaces is to use a physical location that one knows extremely well. Using a video game takes away from some of the physical spatial navigation aspects.

But not anymore. Mapping VR to a physical space allows one to be completely immersed. This is different than AR (augmented reality). While AR can be used to build mind palaces, those are very expensive headsets (like HoloLen2) and generally not available to the general public.

I’ll freely admit it is very time consuming to learn how to use a video game engine. And how to import pictures, 3D objects, lighting, navigation, etc.

I will also say that I am not a game designer by trade but I did manage to teach myself everything to this point on my own using videos, books and on-line courses. If I can do it, then anybody can do it.

Not everyone needs or wants to build mind palaces using virtual reality and being able to walk around inside of them using your feet and looking all around a digitally created world. I get that.

I also get that using VR for those who are into mind palaces, this is a game changer, no pun intended.

Now that the cat is out of the bag, the genie is out of the bottle, (insert other trite colloquialisms here, haha) I plan on doing a lot more with mind palaces both indoor and outdoor.

This entry was posted in Uncategorized. Bookmark the permalink.